I hope I’m never somebody’s “gay friend” that they bring up to justify their homophobia. Let me tell you, if you’re against me having rights, then we’re not really friends.

What an absolute douchebag… dear Gary mccoy: go die in a fire.

(via Dorothy Surrenders: Signs of the Times)

Because the fact that I donated to the Kickstarter means I also can’t donate to charity (which I do). TMZ can preach to me when they stop digging through celeb’s trash cans to get their “news.”

Listen as Albert Einstein Reads You A Scientific Essay

It’s his voice, in your ears, from 1941, reading his essay ‘The Common Language of Science’. Words, I do not have them. Enjoy 🙂

Whenever I think about Kratos I just picture him doing menial tasks and yelling “AAAAAAAAAAAAAAAAAAAUUUUUGGGHHHHHHHHH!” the whole time. 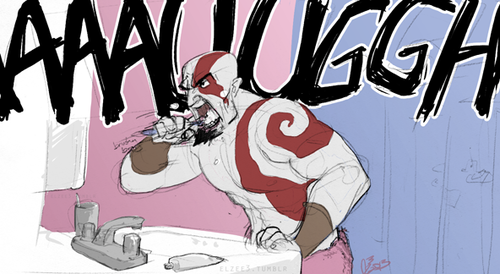 Gotta get those tonsils sparkly clean.

aah oh wow this is great

my best friend in middle school wasn’t allowed to wash her hair with anything other than this weird lemon juice concoction because her terrifying mother objected to “chemicals”, I spent a lot of time being like BUT WE’RE MADE OF CHEMICALS at her, to no avail

This is so great. Chemicals are not inherently bad, people.

basically obligated to reblog this

There’s a brand of detergents that promises ‘no nasty chemicals’. AUGH.

as a chemist, this is relevant to me

chemicals are our friends!

Ugh this! While I understand people wanting transparency with their food and what is in it, blind fear of “gmos” and “chemicals” is really harmful too.

One of my favorite parts of Brave New World is when one character can’t actually figure out how to explain chemicals. It made me realize exactly how arbitrary the distinction is…

Man, this this ingredient statement is in that weird Hong Kong/European label style, instead of the kind I’m used to seeing.  Didn’t know they had to call it nicotinamide instead of “niacin”.

(A gay couple has just met up in the restaurant and kissed each other upon arrival. Another customer has seen this and is obviously angry.)

Gay Man: *quietly* “Is it too much to ask for a little human decency?”

Angry Customer: “Human? Listen up, what you’re doing is not human. I think I have the right to determine what I think is human.”

(The manager shows up. He’s a quiet Italian man who I assume is conservative due to the Christian imagery and portrait of Reagan he keeps around the restaurant.)

Angry Customer: *to the owner* “Hey, can you move either them or us to another table?”

(Instead of responding to the angry customer, the owner instead speaks to his wife.)

Owner: “I’m sorry ma’am, but we have a strict ‘no pets’ policy in my restaurant.”

Owner: “Well, according to your talking monkey over here, I can determine who’s a human and who’s not. You bring an animal into my restaurant; I gotta assume it’s your pet.”

(The angry customer storms out. When I left, the owner was giving his description, and copies of security camera footage, to the biggest crowd of police I’ve seen. Apparently it’s a bad idea to not pay your bill at a restaurant that gives free coffee to cops.)

Gemini 5 (officially Gemini V) was a 1965 manned spaceflight in NASA’s Gemini program. It was the third manned Gemini flight, the 11th manned American flight and the 19th spaceflight of all time (includes X-15 flights over 100 kilometres (62 mi)). It was also the first time an American manned space mission held the world record for duration, set on August 26, 1965, by breaking the Soviet Union’s previous record set by Vostok 5 in 1963.

Gemini 5 doubled the U.S space-flight record of the Gemini 4 mission to eight days. This flight was crucial because the length of time it took to fly to the moon, land and return would take eight days. This was possible due to new fuel cells that generated enough electricity to power longer missions, a pivotal innovation for future Apollo flights.

Mercury veteran Gordon Cooper was the first person to travel on orbital missions twice. He and Conrad took high-resolution photographs for the Defense Department, but problems with the fuel cells and maneuvering system forced the cancellation of several other experiments.

This was the first mission to have an insignia patch. After Gemini 3, NASA barred astronauts from naming their spacecraft. Cooper, having realized he had never been in a military organization without one, suggested a mission patch to symbolize the flight. NASA agreed, and the patches got the generic name of “Cooper patch.”